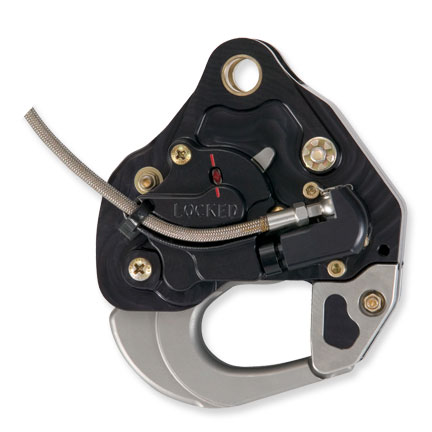 Airbus Helicopters AS350 B2 & previous

If you already have an Onboard Systems swing suspension system with a TALON® Keeperless Cargo Hook installed, but are interested in swapping it out for a TALON Hydraulic Cargo Hook, then our Hydraulic Upgrade Kits are just what you’re looking for! Now you can upgrade your existing cargo hook swing system to the greater load security hydraulic release hooks offer. Buy this part for an AS350 B2 & previous aircraft. This will upgrade kit 200-280-00, 200-280-01, 200-286-00 and 200-286-01 to 200-280-02.

Hydraulic Release Technology — A Significant Safety Innovation
In 2006, Onboard Systems pioneered and developed hydraulic release technology for helicopter external load work. A US Department of Interior Aviation Management Technical Bulletin dated July 16, 2004 discussed common safety issues linked to inadvertent cargo hook releases. The findings show that large amounts of movement during external load operations can cause the cargo hook release mechanism to be accidentally activated by tension on the release cable due to improper rigging.

Manual 'push-pull' cabled release systems need to be installed with very precise limits in order to ensure that the system performs properly. Unlike existing cable systems, the hydraulic line can be routed with the electrical release cable and is unaffected by movement of the cargo hook. It does not require special rigging—significantly decreasing the chance of an inadvertent load loss due to imprecise rigging.

Another advantage of the hydraulic release system is that it will only open the hook when the pilot activates the release handle—snagging or damage to the cable will not lead to accidentally dropping the cargo. If a mechanical cable gets snagged or hit by the load it can inadvertently open the hook, causing the loss of the cargo.

View Manuals, Certifications, and Hardware Notes
$10,044.00
Send Me A Quote Add to Cart